Alicia Christopoulos dives from a sailboat into the Aegean Sea.

In any new endeavor, there is a point of no-turning-back. It's the moment when we commit to trying to fly, or we fall. Regardless of the outcome, at that second, we no longer have the option of keeping our feet on the familiar ground where moments before we stood, stable and secure. For me, that moment of commitment - in my career, in my sports, in my relationships - has always been the most difficult. In the past three years I've left the job I held for 21 years, moved out of the community I was in for 25, sold my home of 12 years, and started a new stage of my work as a writer and photographer - one in which I have all the freedom and fear of being my own boss. I struggled to commit to each of those changes, and continue to find running my own show a daily challenge of uncertainty and hesitation.

January 1st, with it's resolutions, year-end-lists, and personal, professional and government deadlines, leads most of us to challenge our resistance to commitment. For a few days we dedicate ourselves to new diets, financial plans, adventures, and relationships. But, while I have plenty of big goals and dreams that I need to throw myself at, last weekend I found myself thinking of the dozens of small moments each day when I fail to commit to everything from workouts, to typing words onto my laptop screen. And I remembered a photo I have of Alicia Christopoulos.

For a week during the summer of 2010, Carolyn and I sailed through Greece's Aegean Sea with several friends, Alicia and her husband, Thanos, the captain of our sailboat. Every morning I watched Alicia, who is originally from Poland, leave the boat, sometimes with a dive, sometimes just stepping out onto a dock. She would return with a fish - I remember one particularly delicious barracuda - and the rest of the makings for our lunch. Alicia's meals were so consistently delicious and her management of the vessel so fluid and natural, I assumed that she had grown up sailing. But over drinks with the couple, I learned that she had neither sailed nor cooked before answering a help-wanted ad that Thanos placed looking for a cook on his sailboat just a few years ago. Today's she's married to the captain.

After our lunches all the boat's passengers would take a dip in the sea that was luxuriously warm and as blue as any we had ever seen. Alicia would start our swims with a dive that was as delicious as her cooking. Most of us would wait to get into the water ourselves until we had watched her graceful entrance, and eventually I made a series of photographers of her dive.

As is often the case with writing and photography, the editing was a challenge. I narrowed the sequence down to two favorite but very different frames. One showed Alicia in a perfect airborn arc - full of grace and expectation of the splash and submersion in the luscious water. But I found I kept coming back to a frame taken a split second earlier. That picture showed Alicia with her arms outstretched like a bird, her legs coiled like thunderbolts, but her toes still on the boat's railing. That photo doesn't show expectation of hitting the water, but of flying through the air. It's the moment of commitment to the change inherent in the dive - of embracing the airborn second of transition between standing dry on something solid and familiar, and being wet and in over her head in an alien and dangerous place. 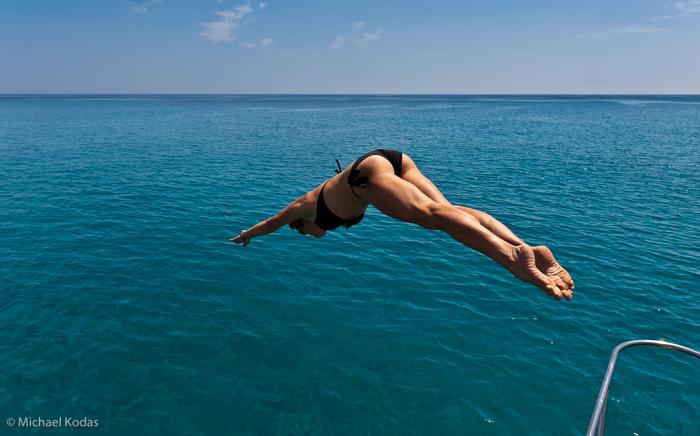 For the first few days of the trip, after watching Alicia dive in, the rest of us would test the water with our toes and slowly lower ourselves into the sea. But you can't make a splash like that. By the end of the trip, most of us were making our own, far less elegant leaps into the sea. And I remember the water always feeling better when I was completely airborn the second before I was in it.

This year I hope we can all find the courage to dive into our lives and embrace those heart-in-our-throats seconds when we're airborn, about to splash into the adventures of our future.